This resourceÂ shares information about alternate reality games (ARGs) — the countries their players participate from, multi-lingual and non-English ARGs.Â This pageÂ is a compliment to the existing ARG Stats page.

Due to the use of the Internet being a main feature of most ARGs, they are usually collaboratively played by people all over the world. Despite the global nature of the format, though, there is little information about the ARGs and their players in countries other than the USA, UK, Canada and Australia. What is needed is data about ARGs created in *other* countries, cultures and non-English languages. This resource doesn’t provide all of these answers. But, after some lengthy scurrying around the web and with the help of some committed folks, we now have a lot more than we did before. When researching this resource I approached many people, but I especially want to thank AndrÃ© Sirangelo (Brazil), Annika Waern (Sweden), Ã‰rica Benites Manssour (Brazil), GeneviÃ¨ve Cardin (Canada) and Patrick MÃ¶ller (Germany) for being so generous with their information and time. This resource provides stats about:

MeiGiest (2007)
The independent UK-based ARG â€˜MeiGeistâ€™ was created Hazel Grian as part of her placement in the Arts Council of England Interact programme Diffraction. Upon completion Grain surveyed thirty of its players and they reported being from: USA: 47%, UK: 44%, Canada: 6%, and Germany: 3%. [Full stats on MeiGiest]

ENGLISH-LANGUAGE MULTI-COUNTRY ARGS BY DESIGN
Despite the fact that most ARGs are played by players from around the globe, most real world events, are designed for those in certain locations in the USA and UK. To address this issue of access, some ARGs have flown players to real world events (Art of the Heist, for instance, flew players across the US) and others haveÂ created real world events in different locations within a country andÂ acrossÂ countries. The following are examples of ARGs that have provided unique experiences (real world events) and content (unique clues) for players in different countries.

I Love Bees (2004)
I Love Bees (42 Entertainment, 2004) was (among other things) a radio drama delivered through fragmented sound files that were released one-by-one to the players as they answered over 1,400 payphone, in over 50 states, in eight countries. Once a call was answered and a challenge was successfully completed, an â€˜axonâ€™ (sound file) was unlocked for the players online. [Full stats on I Love Bees]

The Lost Experience
The Lost Experience (ABC, 2006), provided unique clues to players by the ABC in the US, Yahoo!7 in Australia and Channel Four in the United Kingdom.Â There were also chocolate bars to be given away, for instance,Â that each country producer designed a real world event to give them away through. [Full stats on The Lost Experience]

Vanishing Point
While Vanishing Point (42 Entertainment, 2007) may not necessarily be regarded as an ARG, it is worth noting the clues were distributed at live events in Washington, California, Canada, England, Germany, Singapore, Arizona, Texas, Florida, Australia and Nevada.Â In most cases the players just had to be at a certain location at a certain time to view some small, but vital, piece of information that then unlocked a puzzle box. Event 2, for instance, had players in Los Angeles, California, Miami, Florida, Sydney, Australia and Phoenix, Arizona witness and photograph skywriting.Â  Event 3 had players attend to a projection in Singapore, Berlin, London, Toronto and San Francisco to unlock another puzzle box (see photo). [Full stats on Vanishing Point]

LOCALIZED ARGS: PM-TRANSLATED
Most games, whether they are ARGs or not, are usually created in one language and then translated afterwards.

Legend of the Sacred Urns (aka More to See) (2004)
Legend of the Sacred Urns was created for the global launch of Sonyâ€™s Aquos LCD Flat Panel Television in 2004. It ran for 120 days, across 15 countries with game content translated into six languages (French, Italian, Japanese, Spanish, Portuguese and German). All of the gameplay (forums, puzzles and live events), however, was situated in the USA, where a competition was held (Monello, 2008).Â  There were over 1 million people who engaged online and Sharpâ€™s entire stock sold out at launch. The ARG companies involved were GMD Studios and Haxan (now Campfire NYC). [See design chart]

LOCALIZED ARGS: PLAYER-TRANSLATED
Large-scale ARGs are almost always in American or British English and are then translated by the players. For example:

Monster Hunt Club (2006)
In 2006, ARG designer Dave Szulborski of ARG Studios was commissioned by Magnolia Pictures to promote the US release of the South Korean horror film The Host. The ARG, Monster Hunt Club, targeted Korean-American audiences with several techniques. These included:

The ARG had good results in the known Korean-American target areas of Virginia/Washing, DC, NYC and California in particular, with â€˜total impressions delivered by the campaign at almost 5 million peopleâ€™ and was an official part of GDC 07. [Full stats on Monster Hunt Club]

The Lost Ring (2008)
The Lost Ring (or Find the Lost Ring) is a McDonaldâ€™s commissioned ARG to promote McDonaldâ€™s involvement in the 2008 Beijing Olympics. It is created by ARG designer Jane McGonigal (who worked on I Love Bees, World Without Oil and other ARGs) and agency AKQA (who worked on the second Halo ARG Iris). The ARG, which commenced on March 3rd and finished on 24th August at the Beijing Olympics closing ceremony. Some characters awoke in strange countries, and many spoke different languages:

Each ofÂ the mainÂ characters also had their own website which is styled according to their character (with cultural sensitivity), and their own ingame forum (see picture below). 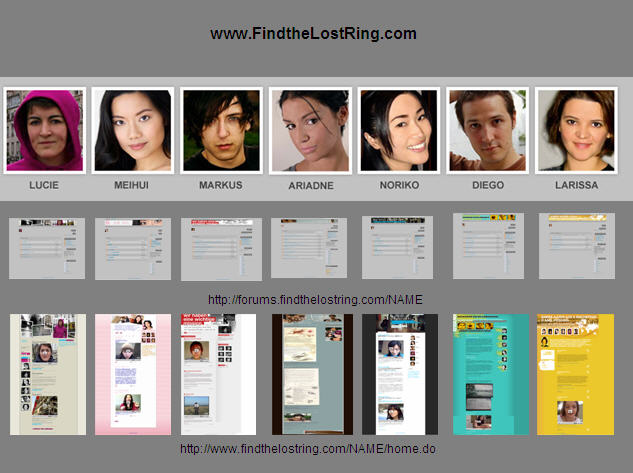 All of these sites are located at the same primary gameplay site: www.FindtheLostRing.com, creating a game hub where players can observe each other. The character Eli Hunt is an historian who has podcast that discusses â€˜Secrets of the Ancient Gamesâ€™.Â Â  This site is a primary research channel for the players, aiding them in finding the â€˜secretâ€™. The English-language podcastÂ added subtitles in multiple languages. 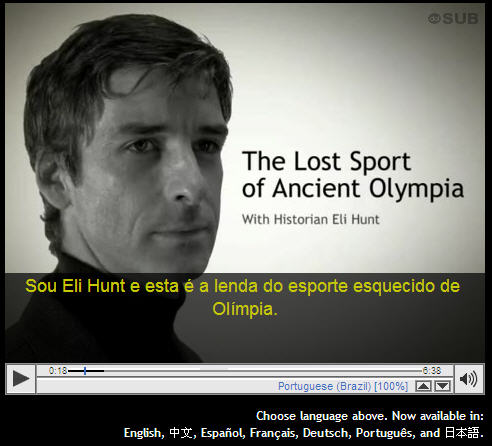 [Screenshot of post at â€˜Secrets of the Ancient Gamesâ€™ with Brazilian Portuguese subtitles, from http://www.thelostgames.com/1/podcast.do]