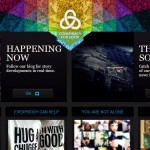 I’m sure you’ve all heard about Tim Kring’s latest project, Conspiracy for Good. If not, here is the introductory video:

I was fortunate to have been involved with CFG early in the design process when I was brought in by Nokia as a transmedia story and game consultant. The project has since changed, and so I’m excited to see what happens! I wanted to know a bit more about the background of the project and Nokia provided me with the answers! 🙂

Conspiracy For Good is a very big idea and as such has involved well over a hundred people in several countries to make a reality.

Why did Tim Kring decide to partner with Nokia on this project?
Tim Kring has long been watching the development of mobile platforms as they become an integral part of people’s lives. To make the Conspiracy for Good a reality Tim had to look to a global partner with a commitment to both innovation and social responsibility. Nokia as the world’s largest mobile phone manufacturer with global reach was positioned to be the perfect partner. Nokia’s commitment to creating innovative content, as well an impressive corporate ethos of philanthropy, aligns perfectly with the Conspiracy for Good’s goal of using narrative to create positive change in the world.

As well as having many elements online, the entire experience is now happening live in London. The first of a series of live events have happened, and so here is a helpful recap:

If you’re lucky you can still get in for today’s action, and make sure you sign up for Action 3 and then the Finale when you can. I wish I could be there!