I bought the December issue of Time Magazine to read about their Person of the Year: You. I was shocked to find the articles full of sensationalist writing about the rise of the person in light of ‘Web 2.0’. It was full of lots of badly researched ideas such as ‘Web 2.0’. The term has been appropriated to encompass notions of social networking and such on the Net, but was originally introduced with a more complex, interesting and helpful listing of what works on the Net. Web 2.0 provides: ‘design patterns and business models for the next generation of software‘. It is ‘little’ things like this I’d expect a journalist to at least tip-the-hat-to before delving into the popular meme. Also, how can a corporation give someone the status of person of the year? Such a move of self-affirming agency can only be done yourself. So…I name the Time Magazine 2006 Person of the Year: Me. 🙂

After my post about the Time Magazine Person of the Year: You, I’ve got to add this neat version enabled by Dan Wood. As he says on his blog, the Time’s cover, with its use of Mylar to have a mirror-looking monitor, is so 20th century. They really should have electronic paper that really did show us on the front. In the meantime, here is the web-enabled version created by Dan Wood for those with Mac iSight. 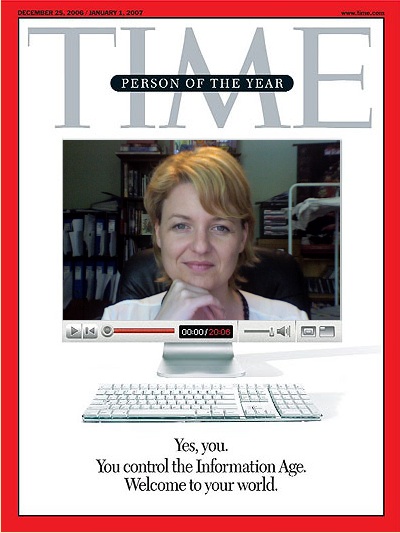